You might know that lentiviral vectors are excellent for delivering genes to cells, but did you also know that they are great for screening cancer cells for potentially important therapeutic targets? In a recent paper (Zhao, et al., 2018. Molecular Cell 69, 699), researchers led by Prashant Mali of the University of California, San Diego used CRISPR delivered by lentivirus to show that mutations in the human KEAP1-NRF2 pathway can mask mutations in oxidative phosphorylation genes that might be used as targets for anticancer drugs.

Most lentiviral vectors are derived from human immunodeficiency virus (HIV), a pathogen that only infects a few cell types. Besides safety modifications designed to prevent the generation of newly infections virions, a further modification to lentivirus replaces the HIV envelope protein with the vesicular stomatitis virus G (VSV-G) glycoprotein, which enables the virus to infect most mammalian cells. Lentivirus transduction is usually more efficient than DNA transfection, so as a result, lentiviral transduction is usually the preferred method for high-throughput applications like gene knockout screens.

The researchers found, among both cell lines, 25 novel cases in which a single gene knockout had little to no effect on cell growth, whereas a pair of genes caused a significant growth defect. In addition, investigators observed that some single gene knockouts had a more severe growth phenotype in HeLa cells than in A549 cells. This difference in phenotype was due to the revelation that A549 cells, and not HeLa cells, carry a mutation in KEAP1, which encodes an E3 ubiquitin ligase that is mutated in many cases of NSCLC and has been implicated in resistance to chemotherapy. Loss of KEAP1 causes an elevation in the levels of some enzymes involved in oxidative phosphorylation, resulting in resistance to single oxidative phosphorylation gene knockout. The authors concluded that design of anticancer drugs targeting oxidative phosphorylation enzymes needs to be done in consideration of the KEAP1 mutational status of the cancer (Figure 2). 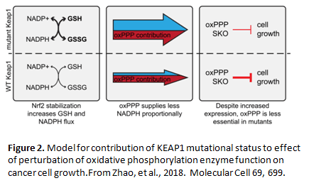 The Zhao, et al. results highlight the value of using lentiviruses for genetic screens, since lentiviruses can deliver CRISPR knockout reagents to cells with high efficiency. So as you can see lentiviral vectors, due to their ability to infect a wide range of both non-dividing and dividing cells, are highly versatile for many applications. Lentiviral vectors equally benefit basic researchers working on a single gene, pharmaceutical investigators validating targets of a highly-anticipated drug, and clinical trial participants undergoing experimental therapies.

How To Use Lentivirus In Mammalian Cell Lines

Lentiviruses are useful gene delivery vehicles for many applications, including:

Most lentiviral vectors are derived from HIV and have been modified to make them effective and safe. In this webinar, we describe how to use lentiviruses in cultured mammalian cells from every step to lentiviral packaging and transduction workflows.