It is well known that CRISPR (Clustered Regularly Interspaced Palindromic Repeat), a bacterial defense system, was first discovered in 1987 and years later commercialized in 2012. It turns out nearly half the bacterial genomes contain these repeated DNA sequences. Later that year in 2012, CRISPR/Cas9 complex was then patented by Doudna and Charpentier for gene engineering. Six months later in 2013, Feng Zhang, PhD, from Broad Institute published a paper showing how CRISPR/Cas9 could edit human and mouse cells. Since then, biotechnology companies and scientists have submitted patents and publications on CRISPR gene editing methods. CRISPR has opened the door to next-generation medicine that might be able to fix genetic defects and fight cancer more efficiently.

CRISPR is the new class of molecular tools that have revolutionized the genome editing field. Compared to the early days of gene editing, CRISPR is a faster, more cost effective and an easier method for engineering your genes-of-interest into almost any cell line. In this blog post we will discuss why most scientists are purchasing CRISPR/Cas9 stably expressed cell lines to further increase their productivity at the bench.

What are CRISPR/Cas9 stable cell lines? 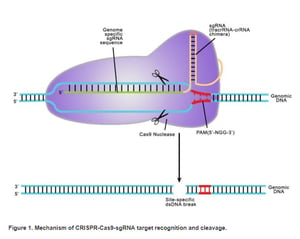 Methods one and two mentioned above generate a stably expressed Cas9 gene in your cell line which has more efficiency than transient transfection by plasmid. To then generate your knockout cell line, simply introduce the single guide RNA (sgRNA) for your target gene(s) and screen for your genes-of-interest for functional gene studies, drug screening or production of protein assays.

What are CRISPR/Cas9 cell lines used for?

Traditionally, in genome editing, the Cas9 and sgRNA can be introduced in the cells on the same or different vectors that lack a stably expressing Cas9 using various transfection methods. Still, efficiency of transfection is an issue and scientists have been trying to find ways to increase the generation of double stranded breaks (DSB). With the introduction of Cas9 stable lines, gene editing efficiency can now be improved by a single sgRNA transduction and selection step. This has made the Cas9 stable cell lines an important resource for various gene editing applications like: 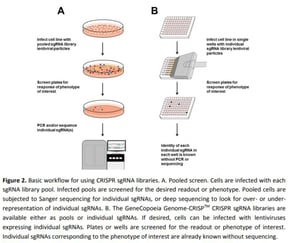 For single and multiple cell knockouts of difficult-to-transfect lines and sgRNA library screens; lentiviral-mediated CRISPR delivery allows infection of a wide range of mammalian cell types and greatly reduces experimental design and improves the efficiency of follow-up experiments. In both cases, as the size of the Cas9 genes (4.4 kb) is large, the titers of Cas9-expressing lentiviruses tend to be much lower than sgRNA-expressing lentiviruses in co-infection. This is due to the inheritance size limitation of the lentivirus packaging system. Therefore, starting out your experiment with a Cas9 stably integrated cell line is ideal for infection with lentiviral-based gene editing protocols.

Cas9 expressing cell lines can be used for sgRNA functional validation and the best guide can be chosen before starting the labor-intensive gene editing studies. While CRISPR genome editing protocols can take over three months to generate, taking the time to validate the sgRNAs for highest targeting and efficiency is well worth the effort before taking the time to do lots of screening and not finding your knockout.

GeneCopoeia has offered the Cas9 stable cell lines for the research above as an off the shelf product. As CRISPR technology grows and the need to publish exciting new drug therapies, CRISPR/Cas9 stable cell lines, that we can provide for you, can be the answer to quickly move your research from protocols to publication.